On January 28th, the world welcomed the Year of the Red Rooster. Happy Chinese New Year to you!

In Chinese tradition, every year is symbolized by one of twelve animals. The year itself, as well as the people born in that year, are believed to share the characteristics of that year’s representative creature.

Tradition holds that all of us—even those not born in other Rooster years—will be influenced by the Red Rooster in 2017. We’re all in for a fiery, fruitful year. 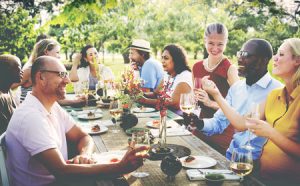 People born under the Red Rooster are known to be enterprising, proud, and trustworthy. They are as dependable as clockwork, and like their animal, they strut and crow with confidence. Often blunt and a bit eccentric, they can be counted on to “tell it like it is.” They’re highly motivated and hard working, natural leaders and fun hosts, and enjoy being the center of attention—as long as they’re prepared to make a good first impression.

As a Red Rooster, you’re bold, beautiful, and bossy, but underneath, you’re grounded by a caring heart and a deep love for family. Be thoughtful and mindful of your intentions on your path to health and success, especially if you embody the Red Rooster’s loyalty, work ethic, and commitment.

Not a Rooster yourself? Regardless, take note of the influence of Red Rooster traits in the year to come. Avoid being overly consumed with external beauty and perfection, or the impatience that follows with impulsiveness, that tendency to want to get everything done “right this minute.”

We’ve just bid farewell to the adventurous, often chaotic Year of the Monkey in 2016, so now we would be wise to keep ourselves centered. Channel that restlessness and remain organized and focused. Be sure to stay balanced, too, in your physical activities as well as social situations.

Do you tend to act first and consider consequences later?

Does meditation fuel “the blues” in you?

Do you find your strength in bold, dynamic action?

Then the Red Fire Rooster will surely resonate with you. Initiative, industriousness, generosity, and honesty are the Rooster’s key positive features, but again remember balance. Narcissism, egocentrism, and criticism are the potential weaknesses you might want to work on in 2017.

Sound like a challenge? More than ever, this year, you’re up to it! With all its complex traits, the Red Rooster is a year to crow about—and potentially to wake us all up to a new era of possibility.