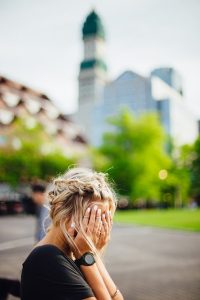 Colleen came to her phone coaching session in tears.

She had just returned from a lunch date with a girlfriend and sounded distressed. Colleen explained that her longtime friend, Justine, was in emotional pain from a fresh breakup with her boyfriend. Justine poured her heart out to Colleen, who in turn tried every way to calm her, soothe her, and present options.

Colleen was the most empathetic of friends. Justine’s pain hurt Colleen, too. She wanted to make Justine a little happier and see her begin to move forward. But Justine became more and more upset as the conversation progressed. She expressed her deep frustration, hurt, and anger at her boyfriend, men, her life in general—and eventually friendships fell under her fire as well. Justine yelled at Colleen, “No one understands me or ever will. I’m lonely, angry, and miserable. And you’re part of this, too. I’m done.”

And now, Colleen felt depleted, exhausted, and resentful toward her friend. All her efforts felt like…failure.

Have you been in Colleen’s shoes: doing your best to be supportive of someone you respect, yet being “rewarded” with negative feelings of your own?

Colleen is an intuitive and caring being who felt devastated for her friend. She wanted to help Justine through her misery, but the conversation just didn’t work out that way. Instead, Colleen’s intentions exploded right in her face. No wonder Colleen was upset by the time I talked to her on the phone.

What had gone wrong? By stepping away and looking at Colleen’s situation objectively, we might identify some common issues that any sensitive person—maybe even YOU—would benefit from recognizing early enough to correct course.

Acting in empathy versus acting in compassion

You may be surprised at the suggestion that there’s a difference between “empathy” and “compassion,” but they truly are not one and the same.

Empathy might sound like the ultimate decent response in theory, but in practice, it’s a burden that hurts the person who gives it. Neuroscientists have even found a physiological difference between the two stances: Compassion lights up happy centers in our brain, while empathy triggers pain centers.

Compassion allows us to care about others while also maintaining our own integrity and balance. Listening and holding a warm, safe space for someone’s evolution in the midst of unhappiness is a far more effective and desirable approach than sharing that person’s unhappiness ever could be.

What might have happened if, instead of empathy, Colleen had offered her friend compassion? She still would have given Justine the ear she desired, then mirrored back her emotions (“I hear you’re having a hard time with John’s infidelity”) rather than offering unsolicited advice and suggestions.

We can show up for others more productively if we recognize and don’t cross the line that divides compassion from empathy. Compassion doesn’t just save a person from becoming mired in another’s emotional storm; it is truly the better way to be a friend.

Highly sensitive people and the “fix this” trap

Colleen is a highly sensitive person—an empath—one who is so attuned to other people’s feelings that she feels them, too. Friends say they’re drawn to her big heart and willing ear. Though this is intended as a wonderful compliment, in truth, empaths like Colleen find themselves exhausted by their “gifts.” Tasked as caretakers, they become overwhelmed in relationships.

Empaths tend to be vulnerable when faced with large crowds and loud noises because they sense and easily take on the energy—or the negativity—all around them. Colleen’s sensitivity even stretched to the physical. She began to feel rundown more often than not and catch colds frequently.

We women—and in particular, highly sensitive people like Colleen—have a cultural inclination to caretake, to see that everyone is happy. That backfired this time because Justine didn’t really want her problem to be “fixed.” She just wanted Colleen to hear her, to offer a warm, safe space to “be” and the room to cope with her own struggle.

If we allow others to find their way, we can be there for them. To react with compassion rather than empathy is a caring choice that we can offer honestly, without the expectation that another’s challenges will be resolved. We can’t control the ultimate flow of events or the emotions of others. We can only influence our own feelings and responses.

Especially if you are a highly sensitive person like Colleen, I urge you to shift your desire to “fix” life for someone else to an insistence upon “fixing”—really, preserving—your own mental and emotional energy. Refusing to accept the responsibility for others’ issues isn’t selfish, it’s self-care. You can be a compassionate ally without being a sponge for another’s negativity.

Changing how you deal with others’ problems isn’t easy. Colleen is learning to establish healthy emotional boundaries in her relationships. And you can learn this, too. Only then, when you’ve maintained your own valuable emotional energy, can you be there for others in an empowering way.